As mentioned over on Martin Hofer’s blog, you can mod the outer hinge pins to a set screw retaining method, to help to remove some free play on the suspension. I’m also not a massive fan of e-clips.. they tend to go flying! So this mod is a bit of a win-win, and it’s not too difficult to do either.

So, the first thing to do is drill some holes in your hubs. I use a 2.5mm drill bit, and centre the hole on the hubs. Using a 2.5mm bit is best, as then there is enough meat left when using a M3 grub screw. I would also suggest using a 1/8″ reamer after drilling the holes to make sure the hinge pin holes are cleared. Photos show the positions I’ve drilled the holes in the front and rear hubs. 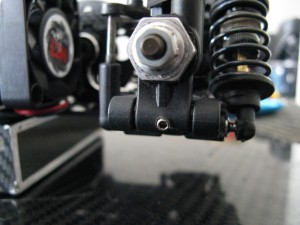 The next thing to do is file a flat on the actual hinge pin itself, as this is what the grub screw will lock onto. Best way I’ve found is to use a small square file. You can also remove the end clip sections for neatness, but it’s not vital.Having a deep-ish flat section will also help retaining the hinge pin, if the grub screw backs out a little. 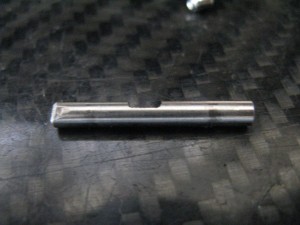 And that’s it! Assemble as before, but just don’t go too hard on the screws into the plastic, you don’t want to strip the holes out!