Has it been so long?

Wow… only just realised it’s been over 18months since my last post… slightly surprising. Lots has happened in that time! Attended a worlds (88th) in 2016, had a real purple patch in terms of results in the middle of the year (some class wins and podiums), and made the nationals A main in TC, and won 12th! Was a huge year in terms of development for me personally, working hard on driving, and also becoming very heavily involved with the governing body for the sport in Australia.

In terms of the car sides… well, earlier in 2017 I made a big jump in switching from to Muchmore electronics, and have been happy with the results. The latest Fleta v2 Pro esc, and ZX v2 motors combo is very good, with a smooth powerband, excellent brakes and runs cool. Couldn’t ask for much more tbh. And it’s nice running the full suite of gear (batteries included), something OCD about it :p.

But the big change has happened in the last month or so (and in all honesty, a bit of a driver to start up the blog again). After some long hard thinking, and deciding it’s time for some new challenges, I’m going to take a step into the unknown and am now running the Mugen Seiki MTC1 for the year.

Part of the attraction is that is still a relatively new platform, and one that is developing rapidly, and I’m keen to try and contribute to the helping out build a following for the car.

I’ll be adding a more detailed build tips post later, but the having now built two cars, and had a couple of meetings with the chassis, suffice to say been very impressed. The quality is top notch (with the manual being probably the only exception!), and the car literally fell together. Having come from Xray, it’s certainly comparable, if not better in some areas. You can see the renowned Mugen quality shining through, and they have nailed the majority of the key areas. The shocks are fantastic, with a very smooth feeling, and easy to build to boot (as long as you actually follow the instructions!). The diff is free and consistent, with no issues of leakage. The plastics are comparable to graphite plastics, so stiff and light. And the machining work on the alloy is awesome, with locating pins that actually work 🙂

On track, as mentioned I’ve had two days so far, both at my local track of SMA. It’s outdoor asphalt (bear in mind it’s summer in Australia at the moment), with a boral coated suface that has seen better days, but is sugared to bring the grip up. Normally class it low-medium. The current layout has a couple of high speed sweepers, with a tight and technical infield. It’s a hard layout to drive, that rewards keeping it neat and tidy, but demands a high level of steering to be quick.

Anyway, the first few nights, I have just kept it simple, and worked through a few ‘majors’ to try. First run was literally box stock, and car felt pretty decent. First thing that struck me was the composure and smoothness. Almost refused to be upset by bumps and kerbs.. which I’m putting down to the larger volume dampers in use. After a couple more runs, I moved to the Atsushi Hara ‘Bee Tops’ setup, as that seemed like the best match for the track and conditions, and have worked from there;

Current setup attached… but it is obviously a work in progress! 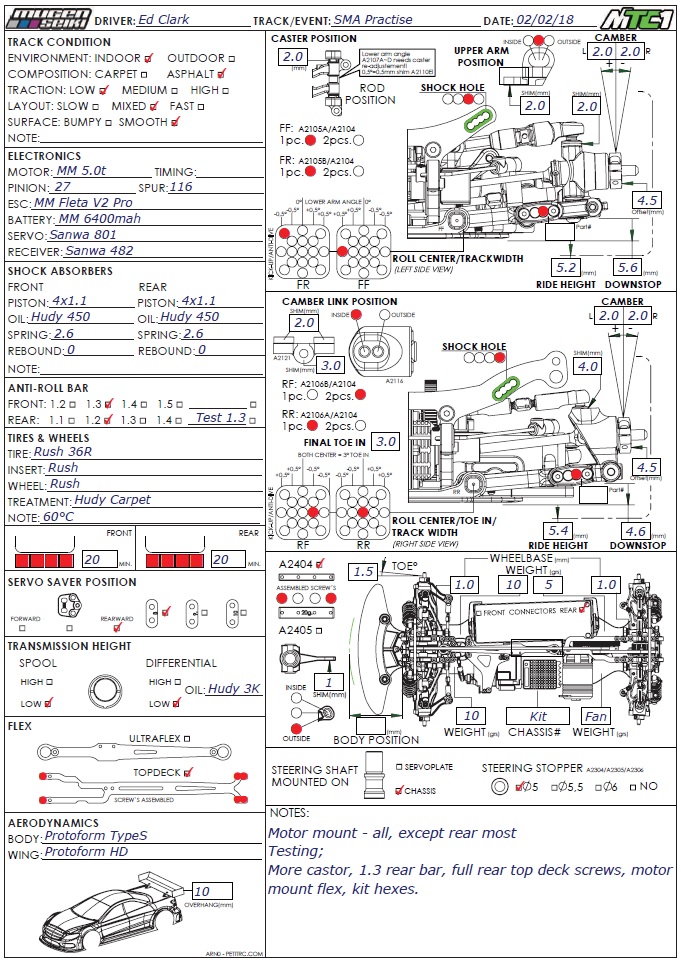 So far it’s been a fun experience learning a new car, and been more than impressed. However, there are a couple of areas to work on, mainly the on power steering is lacking a little. I also need to work on the balance when the grip comes up. I think there is something to explore with the flex. Other options I want to try further are; increasing the castor, stiffer rear roll bar, high diffs, different spring combos, upper link positions.